"The Destruction from 9-11" by Kristina D.C. Hoeppner is licensed under CC BY-SA 2.0 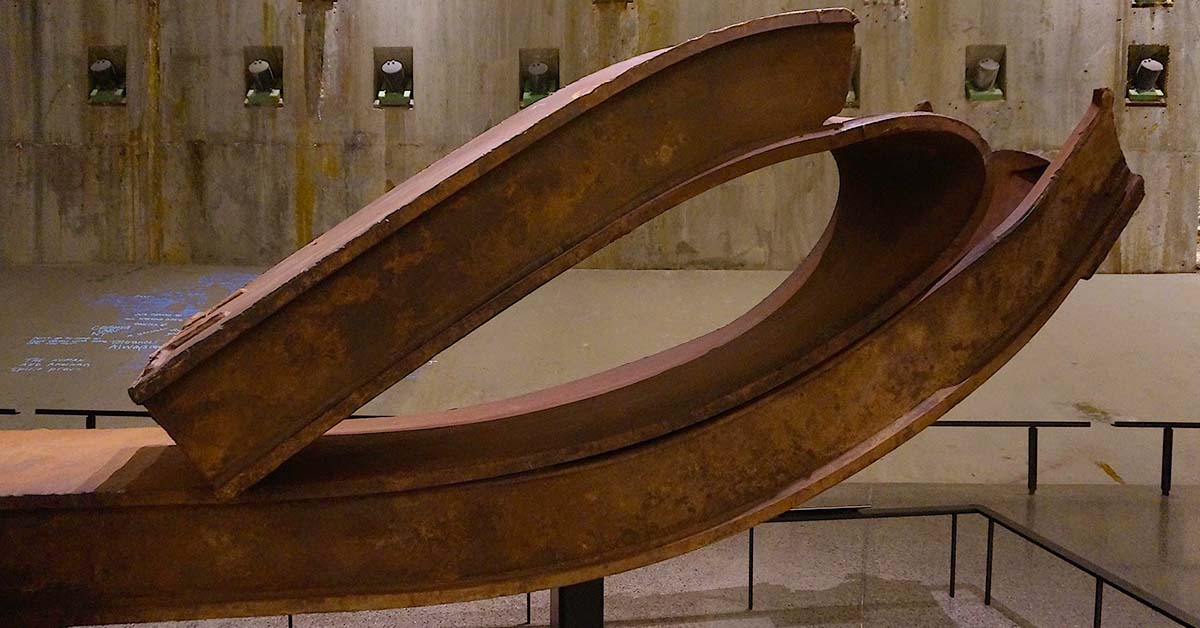 “The Destruction from 9-11” by Kristina D.C. Hoeppner is licensed under CC BY-SA 2.0

TOPIC WARNING – This post discusses suicide and suicide prevention. Please do not read if you are not in a place to read about this topic. If you or someone you know is considering suicide, please call the Suicide Prevention Hotline at 800-273-8255.

Some thoughts at 20 years…

Two weeks ago, I led QPR Suicide Prevention training for Affirmation International Conference. This year, the conference is all held online, so I was able to have people in the training attending from all over the world.

Each time I lead this training, I introduce the subject by asking people to consider a different way of thinking about suicide. Many people might think that anyone who considers suicide is wanting to die. This is hard for many to understand how to help a person who is considering suicide because wanting to die goes against basic human nature and survival instinct. I talk about how avoiding pain is also part of human nature and survival instinct. When someone experiences pain – intense pain – and they can’t find a way to get away from it or end it, sometimes the only solution they can see for escaping the pain is to end their life. When they feel trapped, hopeless, and helpless about escaping the pain, they might look for any way to end it.

When I am covering this part of the training, I show this image of the Twin Towers on 9/11, right after the second plane hit. It is a stark illustration for this discussion about how suicide is not about wanting to end your life, it is about wanting to end pain. The people who were trapped in the floors above the explosions had to have been in unimaginable pain. These were people who got up that morning with no plans to die. They had loved ones, and jobs, and futures they were looking forward to. Then only moments later, they were trapped and unable to escape the intense flames. I can only imagine how hard they tried to get down through the building. Shortly after the planes hit, there were people jumping from those upper floors. Some jumped with another person, holding hands as they fell. Technically, they died of suicide. I doubt any wanted to die. Consider this – it takes 20 minutes in flames to burn to death. It took seconds to reach the ground once they jumped. They chose to do this to end the pain. In the training, I ask people to consider that suicide is not about wanting to die, it is about ending the pain.

As humans, we all know what it is like to be in pain. I hope we all know the difference it makes to feel support and connection with others when we are in pain, how it makes a difference in being able to endure pain when we do not feel isolated, when we belong or feel included in our communities. If we are getting help to see that there are ways to work through and get away from unbearable pain, there is not such a desperate need to escape by dying. I can’t help but remember the image of people clutching each other’s hands as they jumped. Even in the horrifying moment, there was this need to not be alone.

I have been leading this training for over three years, to at least 180 different groups, and I have never presented it on September 11. I considered how to adapt presenting this picture on this day, exactly, almost to the minute, 20 years from when it was taken. There are many feelings, still raw for me and countless others, about any memory of that day. I hoped to be sensitive to that, while still fulfilling the purpose of the training.

And yet, the moment I put this picture up on the screen, I was overcome, and I couldn’t speak.

It was only for a few seconds, but all the horror of that time came back. The unthinkable had happened only a few weeks before. My father had died. I had not slept more than a few moments at a time since his death. I could not imagine this world, my life, without the presence of Dad. Now, another unthinkable event had occurred. I had always been appalled at the way we, as a society, a people, a country, a community, could find ways to justify war. Dad had been a person who made space for me to wrestle with this, looking at the humanity behind the weapons, the tendency to defend our own violent actions, while condemning and attacking anyone who didn’t agree or conform. I have a shirt from 2001. It says “War does not show who is right. Only who is left.” This is when I began to see that WAR is a three-letter acronym for We Are Right. We, as a country have long justified devoting vast resources and countless lives to fight long wars that come down to somehow proving we are right, and we will destroy those who are wrong.

I had not realized how I had wrestled, and marched, and rallied, and protested, and spoken up about this from a place of privilege, a country whose mainland had never been attacked by foreign enemies on native soil. That privilege ended 20 years ago.

19 men flew planes into buildings, and into the ground, to prove they were right, and to destroy those they saw as wrong.

So much changed. Unfortunately, we have not learned from it.

We keep attacking and killing each other off, to prove we are right and they are wrong.

We storm sacred buildings, and erect gallows to remove those who don’t agree with us.

We pass laws to criminalize and control people who have different experiences, ideas, beliefs, appearances, heritage, and options than we do.

We speak at pulpits, or go online, pulling out any reference from dogma, or platitudes, or any narrow view of what we think a correct life is supposed to be, and we insist it is not just true, but that it is the only truth. And we cling to that rhetoric to justify our being right about truth, even when there are bodies left in our wake.

We attack those who have not perfectly lived up to our expectations. We are quick to develop and use weapons – both real and virtual – to destroy anyone who does not agree, accept, and perfectly respond in every way to our own journey. We use any means to be sure that anyone who might have caused us pain, will have to suffer more and longer, because we are right, and they are wrong.

We make up lies, or we readily believe lies that justify our firmly held opinions, rather than consider that science, or history, or facts, or even someone’s faith or insight, might challenge our paradigm or confront us, and ask us to leave a comfortable state of being right, and possibly a need to change our mind, or receive further light and knowledge. Like those who flew the planes, we will go down in flames before we will consider that there might be a different way to see the world, to see our fellow beings.

I couldn’t help but wonder back then, and often since then, what would Dad have done? What would his struggle have been, to carry his thoughts, his writings to a new level of experiencing, feeling with, seeking further light and knowledge, in the aftermath of this devastation?

That day, I tried to imagine what he might have been doing in those moments when so many were leaving this life, only weeks after he had left this life. In whatever state of presence, of existence, I imagine he would have been there to invite and comfort those who were so violently torn away.

Here is another difficult part for me. I know my father was not perfect. I saw him struggle to be the person he said he wanted to be, to follow the most profound and confronting teachings of Christ, to love, and forgive, and repent, and have mercy, even when it was hard, even when there was no guarantee it would make any difference. He often failed. And I saw him try again. While he did not encourage anyone to justify or allow abuse, I saw him go to those who sought to hurt and destroy him. I saw him seek to learn and to share. I saw him try to consider anything that could create connection, even with his enemies, even for a moment, in the hope that there could be a transformation away from being enemies, away from being at war.

It is still difficult for me, but I can’t help but wonder if Dad was also there to greet some of those who hijacked the planes. Did he sit with them and try to understand? Was he there when they possibly saw something different from what they expected? Was there any transformation, because there were some, like my dad, who were creating space for it?

It may have been similar to what is described in one of the last scenes in C.S. Lewis’ “The Last Battle”. The world is ending in a last battle which was created from greed, lies, and conspiracies which destroy everything. All leave the world through the door into a dark stable. Those who have eyes to see find themselves in paradise, in the presence of overwhelming love, in the presence of God. Those who will not see are sure they are in a dark, manure-filled stable, and they will not be moved. They will not let go of insisting they are right.

As horrifying as it is to consider having mercy on such destruction on 9/11, God invites me to have room for transformation from such deadly fear, into remorse and healing for all. I want to think that Dad was part of that, for anyone who would see.

20 years ago, that was a day of such loss, there are no words to describe it. We hear about the total numbers. And total numbers continue since then. This many killed and injured in this shooting, this battle, this riot, this war, this pandemic, this school, this hospital, this famine. There are so many, I can’t comprehend it.

Not long after September 11, 2001, I was reading an account of a man who was trying to figure out how to tell his young son that his mother had died when the towers collapsed. It took him days, and the moment he finally told his son was heart-wrenching. Life would never be the same. I wept as I read this, even as I wept when I was reading or seeing anything at the time. Each account had me reliving the moment my father died.

Nothing would ever be what it was.

The vast numbers seemed a way to shield us from the raw and real experience of that young boy, learning his mother would never be there again.

When there is war, battle, rhetoric and dogma, bullying, destructive laws, hopelessness, shootings, riots, planes flying into buildings, it is not 52, or 600, or 3200, or 125,000 people who die. It is not dozens, or hundreds, or thousands of people who lost a loved one.

It is one person who died – hundreds, thousands, millions of times.

I need to see, hear, listen to, sit with, mourn with, forgive, repent, have mercy, learn from, be one with – one person. Again and again and again.

It is the only way to make sure things are never the same as that day. Ever again.

Reposted from The Exponent with permission.